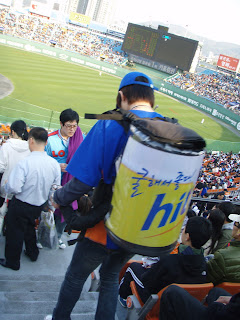 Our first adventure to Sajik Stadium was just that, an adventure. The songs, the food, the cheers, and the pageantry were all on display. Here's my top ten list of things that make Korean professional baseball (Busan Lotte Giants specifically) great.

10. My students' Dads play for
the team - No joke here at all. Two of my students have dads that play for the Giants. I don't think it's right to say who they are, but one of them starts in the field and the other is a relief pitcher. It's really cool to hear about. Every once in a while they'll come in to class super excited and tell me, "My father struck out two batters!" or "My father hit a home run!" It's pretty freakin' awesome, to tell the truth.
9. Foul balls go to kids under 8. This is a strict rule. Any time a foul ball goes into the stand, everyone chants at whomever caught the ball to give it to a child, specifically one under eight years old. A student of mine, Harry, once told me how he got a foul ball at the game. Harry is 11, and he was too old for the crowd. He said he wanted to keep it, but was forced by the crowd to give it to a younger spectator a row ahead of him.
8. Scantily clad bat-girls - Back in America, the role of bat boy is usually filled by a player's son. Here, bat girls add to the entertainment of the entire evening,  at least for the first viewing of a Korean baseball game.
7. There are many a song to be sung -
The lyrics are in 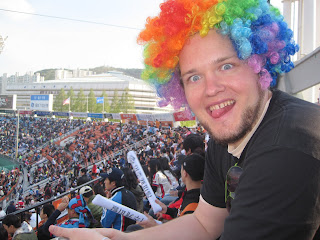 Korean and made to fit the players' names. There's a bunch of classic, standard songs made into cheers: Champs-Elysee (classic French), Glory Glory Hallelujah (classic religious), Rivers of Babylon (classic rasta), If You're Happy and You Know

It (classic kindergarten), Cum on Feel the Noise (classic crappy-glam-metal), What's Up (classic 90's 4 Non-Blondes), all culminating in The Maple Leaf Rag (classic Joplin). Plus there are songs for when common things happen on the field, for example, an out at first base:  "Oh-Noo-Nai" which translates to "Someday."
6. Mini Cooper bullpen cars. In the 80s and early 90s, bullpen cars were used to usher relief pitchers to the mound in the MLB. Being the Brew Crew fan that I am, I remember seeing Jose Orosco being driven up to the mound in the sidecar of a Harley. Here in Busan, the local BMW dealership sponsors the bullpen car, a Mini Cooper convertible. It's pretty awesome to see. I'm a big fan of bullpen cars in any form. Especially if it's a car for high school girls and men going through midlife crises. 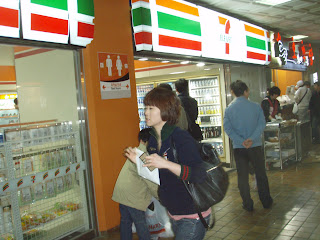 5. Convenience stores in the stadium with my choice of beer. Do you hate paying $7 for a Miller Lite at a MLB stadium? I do as well. Screw mass
produced American beer in general, but it gets even worse when you have no choice and have to pay way too much for it. Enter the concourse area in Sajik stadium and enjoy the pleasure of in-stadium-convenience-stores. Beer fridges stocked are high. The prices are slightly elevated from the store downstairs from our apartment, but it's still less than 7,000 won for 64 oz bottle to share with friends. And yeah, it's still crappy Korean lager, but I'd rather drink a Max than a Busch Light any day, night, week, or weekend of the year.

4. Dance battle in the crowd = much more fun than Kiss-Cam. Yes, this is just what it sounds like. There is still a Kiss-Cam, but it is not the only jumbo-tron attraction in this town. Dance battles, yes, dance battles. 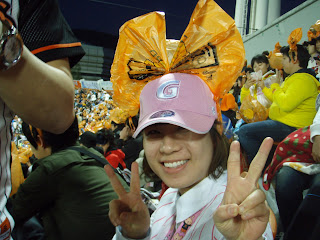 3. Lively spectators. I love a baseball game. Most any baseball game. Sometimes a crowd just isn't into it. Not so with the home crowd at the Giants' games. The crowd is pure electric. I've told you about the cheers, the songs, and the availability of copious amounts of beer. What elevates all of that is the dedication of the fans. They are in it until the end of every game. It's a party in the crowd and everyone is invited. Our seats were loud, super loud. It was like being back at a metal show in America, almost. It's not like metal shows have cheer leaders with a costume change per inning, but you get the point. The stands shook when the dancing girls started up. On top of that, the fans bring their party supplies to the game. Home made pompons from that day's sports sections are one of my favorites. Also the inflatable fingers, not foam, make a game day easily packable, yet fun to be at. The best comes around the 7th inning. Bright orange, plastic garbage bags are handed out to all the game's attendees. These bags are meant for stadium goers to bag their own garbage out after the 27th out, but for the 7th and 8th innings, they become Pacific-Rim-Ralley-Caps. Flopping, bubble style for the boys, Minnie Mouse style bows for the girls.
2. Fried Chicken. Growing up a Brewers fan, I know that stadium food means popcorn, peanuts, and sausages. Encased meats of all kinds grace Miller Park back in Milwaukee, but in our adopted hometown, fried chicken is king. Fried chicken in the stands is awesome. Get it inside or outside the stadium. It almost always comes with a couple of sauces and sometimes chopsticks. The chopsticks are nice, but isn't stadium food meant to be eaten with your hands. Oh yeah, get yourself a chicken glove, basically a Subway sandwich artist plastic glove, but it keeps the fingers clean and keeps the chopsticks in the box.
1. The price. Lets get real. I love the Brewers, but it can cost ton to visit the old ball park. $50 can get you to the lower level on the first base side for a game back in Milwaukee. In Sajik, we had premium seats for a grand total of 10,000 won a ticket. Lower level, right above an in-stadium 7-11.

Busan baseball, how I love thee, let me count the ways. Oh wait, I just did.