An Activity for Measuring Area

I might be preoccupied with leaving Korea, but I still have my job to do. These days the kids are finishing up the chapter on measuring. In a few weeks they will have their final tests and then it's a week and a half off for Christmas!

The measuring unit covers inches, centimeters and area. This kind of subject area is really straight forward but also can be expanded to cover talking about comparatives. Such as, "She is taller than me." So I have been integrating some basic English learning along with the target Math subject area.

For measuring area I wanted to give kids a physical experience of how this works. So after an introduction and doing the book work pages I gave them an activity. Each student got a worksheet that has four sections on it. In each section is a picture and an example sentence. This relates to a set of four pictures that each team receives. (The white paper you see). On this set of papers are different pictures, such as a strawberry and a pacman. 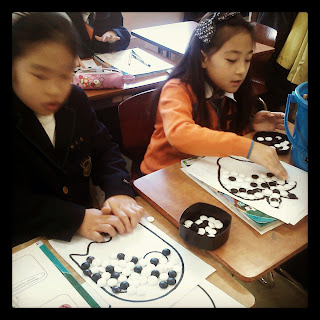 The students share the pictures and also share a box of baduk beads. In case you don't know what these are, they are small black and white semi-flat beads that are used in a classic game here. Also called "Go" in Japan.

They use the baduk beads to cover up the area inside the pictures. Then after they count up the number of beads it took to cover the picture they refer back to their worksheet to write a target sentence. "The strawberry is 50 baduk beads in area." 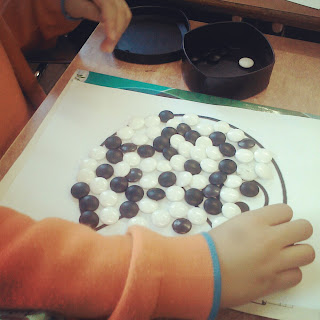 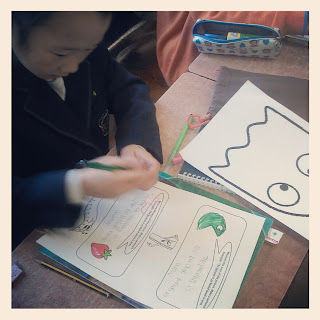 Was it a success?

You bet it was! The students really cared about filling up the area inside the pictures and then concentrated on counting them up. Sure some of them counted in Korean, but then they had to write about it in English. Also after counting they would shout, "Teacher! The Ghost is 110 baduk beads!"

I enjoyed walking around the classroom helping them and seeing their concentration on this activity. I hope it helped the students understand the concept of "area" and how to talk about it in English.

If you don't teach Math this might be a good activity to use in classroom for just counting numbers or making patterns within the shapes. Besides using the baduk beads has become a very versatile tool in the classroom. I would suggest getting a set and seeing what you can do with them.

I'm going to miss being in the classroom, but hope I can take all this hard work with me as I get my MA. Ed in TESOL.