Sun, 06/28/2009 - 19:30 - leeskoreablog
Printer-friendly version
Tweet
Six months have passed since I left the familiar surrounds of Busan. The Korean university system is fairly good, but lags noticeably behind the west in a number of ways. As a summary, those ways would be social conservatism, class quality and student freedom. But to make up for these shortcomings, Korean students work incredibly hard. This puts them on par with the quality of research churned out by their western counterparts.
If I were better informed of the conditions here before I came, I may have made a different choice. But I've started now, and quitting is not one of my usual habits.

Perhaps, someday in the distant future, I can be in a position to influence some changes here. For now though, I'll just count my lucky stars and think of myself as fortunate to have even received this opportunity in the first place. 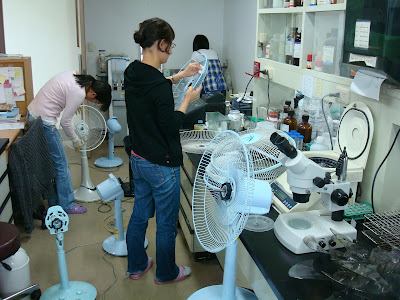 Summer is in full swing and the lab heats up accordingly. Our central air-conditioning system is controlled at the switchboard downstairs, and is turned on sparingly. When it is on, it lowers the temperature to a bearable degree. But often times in the lab, like now while I'm blogging on the weekend, it's completely shut off. So we work in a fairly warm environment. Luckily though, we have a lot of fans to blow the warm air around.
I've never washed a fan in my life, but here they get dismantled and washed with soapy water before use. There seems to be a cultural difference towards perception of dust. In Australia, dust is like rain, and just one of those things that you ignore. In Korea, both dust and rain are things to be avoided.
Down in Busan, I was once showing Heather my awesome nun-chucking skills with some clean socks of mine. All of a sudden she started screeching "Mon-ji! Mon-ji!", which means "Dust! Dust!"
So now I have to refrain from freshly laundered sock nun-chucking for fear of inciting dust-related panic in the local population. 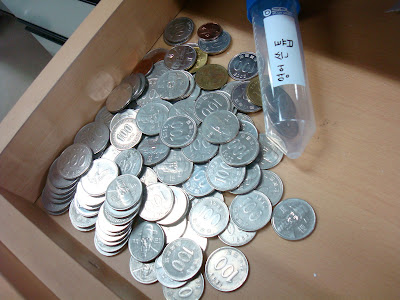 Even though I'm a poverty-stricken student here in Seoul, I still manage to accumulate change in my drawer. Each of these coins is only worth ten cents, and it's hard to use them up on a daily basis. 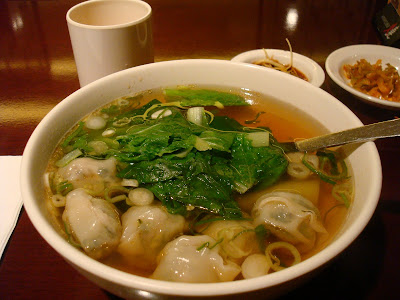 Wednesday nights are my new weekends. On the weekends, I'll usually be in the lab or down at the greenhouse. But on Wednesdays, I go to Toastmasters, which means I leave early and get to eat somewhere exciting in Gangnam. I've been eating at a different place each week, and last week I went to Din Tai Fung which is a Chinese restaurant chain that specialize in dumpling soups. I had the seafood dumplings in the picture above, and they weren't bad. Definitely fresh but flavoured a little disagreeably, probably a result of too many chives. But the soup was spot on, and quite nice. 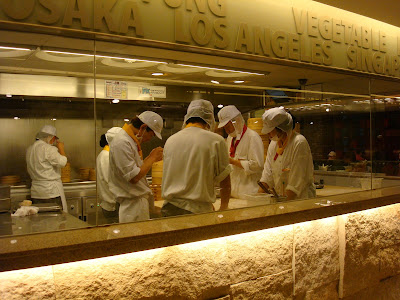 Here are the dumpling makers who craft them as you order. I used to make dumplings back in the day, and can still wrap them. It's hard to get the filling right though. 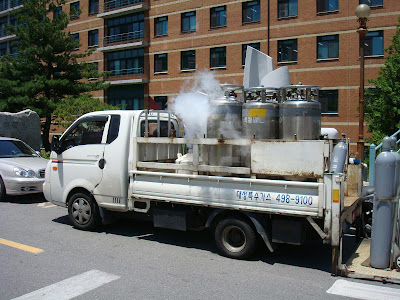 This is the liquid nitrogen truck that visits us once a week to fill up our stocks. Liquid nitrogen is useful for preserving cells in suspended animation and various other things. If you mix it with soapy water, you get lots of cloudy bubbles. 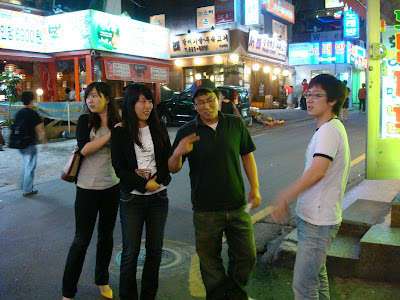 A couple of weeks ago we went out with some of the other labs to celebrate the end of classes for the semester. University hwe-shiks (work dinners), don't happen very often but are pretty fun. We're allowed to drink soju and beer until we get silly. In this photo are some members from the virus and mycotoxin labs. 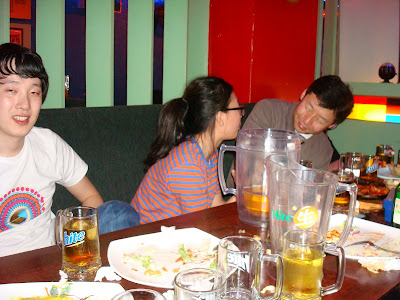 On the left is Chan-ju, and in the middle is Ye-lim talking to the virus professor. By this stage we had all imbibed a retrospectively inappropriate amount of alcohol. 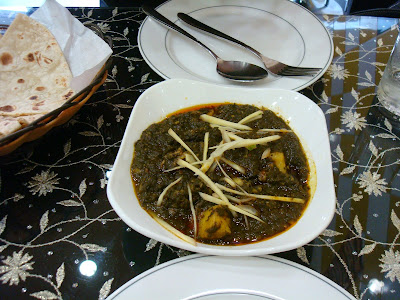 I met a vegetarian girl at Toastmasters called Mi-Sook. Back in Australia I was a vegan for half a year before coming to Korea. It's very difficult to maintain a vegetarian lifestyle here, and I took the easy road and started eating meat again. But I still agree with the principals of animal rights and intend to convert back someday. Until then, I'm a 'part-time vegetarian'.
I took Mi-Sook out to Itaewon to eat some vegetarian dishes. In the photo above is a Pakistani curry. Itaewon is full of interesting dishes like this. 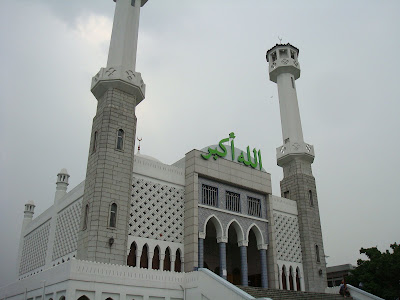 We went for a walk and found an Islamic mosque up a hill. The surrounding views of the city were quite nice. 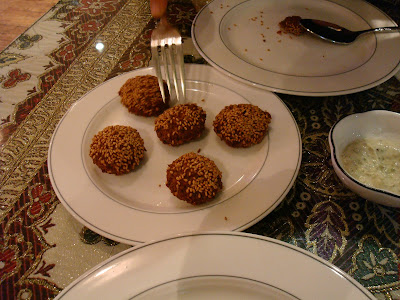 And then we found some falafel. Falafel is a vegetarian dish made from chick peas and spices. If I weren't so lazy, I'd make it myself at home and eat it everday.
Back in Australia, there's a falafel shop downstairs from my old place. They sell some amazing falafel rolls with toasted pita bread and garlic sauce. When I go back in September, I'm going to get one.


Yong-Sung is one of the nicer seniors in our lab and he's leaving to America next month for a post-doc. On Friday we went out to celebrate his birthday and ended up in this noraebang, near the Seoul National University subway station. Apparently, Yong-Sung is very passionate about this song. 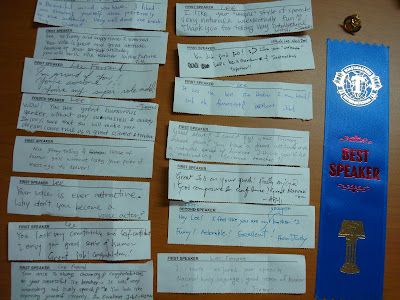 Ah, Toastmasters. You know, you should really go to Toastmasters if you can. There are some good clubs around, and probably some not-so-good ones too, but luckily I found one of the better ones. This blog is probably going to turn into Lee's Toastmasters Blog soon. A couple of weeks ago I gave my first speech, called The Icebreaker. It was about my youth in Australia and what led me to join Toastmasters. I won the best speaker of the night award, which was nice. Those little pieces of paper are feedback comments from the audience. The great thing about Toastmasters is that it's such a supportive and positive environment. 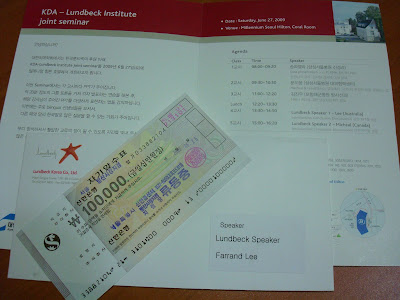 And the other cool thing is that it's a great place to network. Pil-Soo is the CEO of Lundbeck Korea, a Danish pharmaceutical company here. These days I tutor some of his workers for my part-time job. I also got invited to speak at a neuroscience conference at the Hilton hotel. I spoke for an hour about how to give effective scientific presentations. I had a free lunch, the pay was good and I felt pretty special about the whole ordeal. 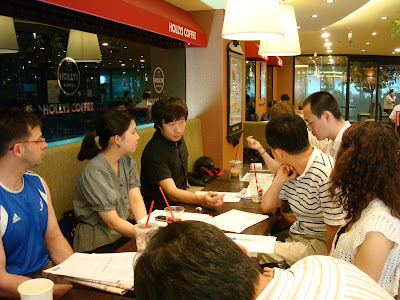 I volunteered for the Webmaster position at our Toastmasters club, which means I'm supposed to look after the website. I'm sure I'll learn pretty quickly, but I've never worked with basic website design before. Lee's Korea Blog is all done on a WYSIWYG template manager and any monkey can do what I'm doing.
So I think there's going to be a steep learning curve before I can start improving the club website. The photo above is from our meeting today in Gangnam with the other officers. These people are pretty cool, and I'm sure if we were to start a company together, we'd make some serious money. 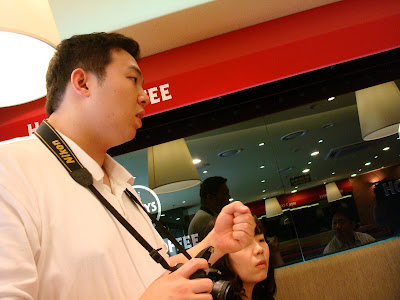 And here's Joseph Jeong, the outgoing president of SRTM. Joseph is one of those people who is good at making decisions and can inspire others to get things done. He's off to the University of Chicago later this year for his MBA. Our new president is James Lim, a fellow Australian with a friendly attitude and a penchant for smoking shisha.

Joseph bought that new camera this morning and I'm feeling more than a little dSLR envy. 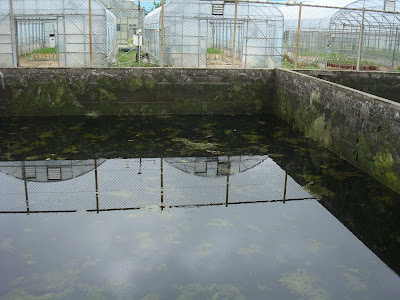 This murky cesspool is actually the water reserves for our rice field down at Suwon. The water is held here over the winter and is then drained into the fields. Apparently rice crops are not particularly fussy about the water they drink. 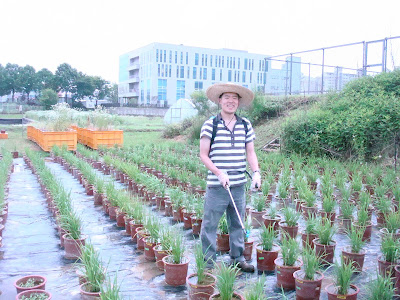 Se-Kyung took this photo of me spraying the crops with insecticide. It's an overexposure, and her finger must have flipped the mode switch. That backpack I have on contained 15 litres of a chemical that smelled mysteriously like petrol. 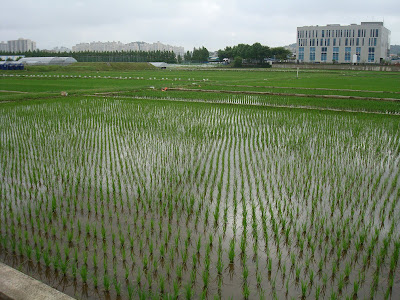 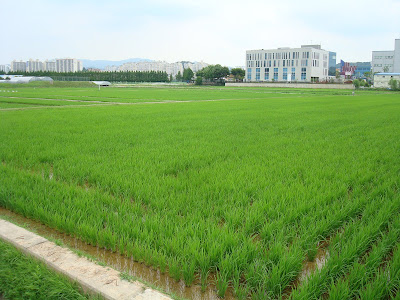 These two shots were taken only two weeks apart. Probably due to the humidity and rains in Korea, things seem to grow faster than they do in Australia. 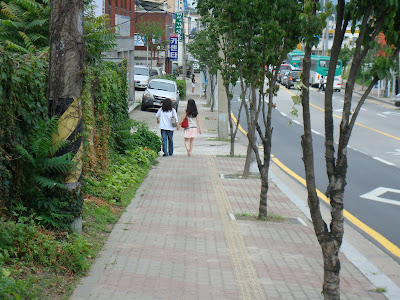 And to lead us out this week is this photo. It's a little far away but those two girls are holding hands. I would have snapped it a little closer, except it might have been potentially rude. In Korea, both men and women of the same age hold hands with the same sex. It doesn't (necessarily) mean that they are dating though. It's just a way of expressing friendship.

See you next time!