Re: Electric Scooter, Drone, Powerdome...
4 days 7 hours ago
Re: FOR SALE PHONE
1 week 6 days ago

Excitement and that I-don’t-know-what’s going-on is how I started the Day 2 of the WKB Tour, we knew we were meeting very Important people at KOCIS that day, we knew there would be Cameras and we will have to answer some questions, but we never imagined what was waiting for us at KOCIS’ offices…..

Ema, Annabel, Maria and I got up early and met for a quick breakfast to be ready for Grace to pick us up and take us to KOCIS, we went on a Van and after a short drive we arrived at KOCIS and they were there…. Han Jeon (KoreaNet) with his Camera ready to take pictures and 2 Camera Men… O M G!!  I was getting off and trying to fix my hair for the meeting (lol) but they were there ready to start filming us…. You’ll see, I’m VERY VERY SHY, I don’t like having my picture taken I don’t even let my sister (photographer) to take pictures of me :S, but there they were waiting for us, filming us as soon as they saw us… the 4 of us had that nervous/awkward smile and we started by taking “group”pictures outside the building, Smile!, look here!, look there!! And then the Main Camera man came to each one of us and asked us for an introduction to be filmed… I bet that is going to be a very awkward introduction because I never know where to look at when I have a camera in front of me….

After some shots of us in front of the building we went up to KOCIS offices… I was nervous enough not knowing what would we be asked but there were cameras there O_O, so I want to apologize to everyone for being so awkward when I had a camera infront of me (hehe).

We then met Mr. Woo Jinyung (Director of KOCIS) and Suh Jeong Sun (Director of Global Communication and Contents Division), we seated in a round table and started talking about our blogs, why were we blogging about Korea, what was our Main interest in Korea, What was like to be in Korea (or to be back in Korea^^), etc… I have to say it was a nice conversation and we all got to know the other bloggers a little bit better J , after this we handed Mr. Woo a few presents we had prepared in advance and then they gave us a Special package with gifts, each one was different (I got a Book of Korea in Spanish!!), then we proceed to take more pictures, after a couple of pics we went on a little tour through the offices of KOCIS, we got to see where they write for Korea.Net and then found another meeting room where we took more pictures sayin "WKB Fighting!!" and just trying to  pose, after our meeting we were ready to start the Tour of the Day!! We had a long day waiting for us, so we were really excited!, we were at the lobby of the building and the Camera man (aka Yeon) asked for 2 volunteers to film some other questions about the meeting and somehow I was one of them (This happened to me very often…. ¬¬), anyway I did it and we thought that was the end of the Cameras until we went out and Yeon took the front seat of the Van…and that’s how w efound out they were going to be with us for the WHOLE Tour O_O


We headed off to the Cheonggyecheon stream and the 5 minute drive was really awkward because I had the camera almost in front of me… I was just thinking “please act natural please act natural”, when we got there I was very VERY excited, I’ve been wanting to go to the Cheonggyecheon stream since 2009, even though I went in 2010 it wasn’t the same…I wanted to see it with lots of greens and that day the weather was perfect, we soon reached a point where you are supposed to throw a coin and ask for a wish… I had 2 coins and of course my coins didn’t reach the exact place L but soon Camera Man #2 (aka Sun Ho) ran to me and gave me a bunch of coins (Thank you Sun Ho!!! I still owe you J ) so I tried it a couple of times more until I made it!!!, hopefully my wish will come true.


After the stream it was time to go to the Gyeonbokgung Palace to catch the Royal Guard and have a guided visit, I’ve already been to this palace before but I had never seen the Royal Guard changing and our Guide was very nice and smart so I’m glad I had another chance to visit this place again since I learned a bit more about Korean History, plus everything in Korea just look different depending on the season. 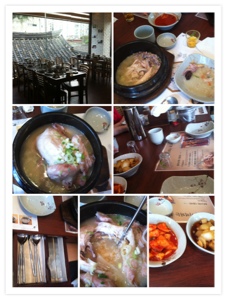 We then headed over to Insadong for Lunch, I love Insadong, there’s so much to do and see but we were in a bit of a hurry so we just went straight to the restaurant to have Lunch, we went to a famous restaurant filled with pictures of celebrities eating there and we all had “Insadong Samgyetang” which is a Korean soup with a whole young chicken and Korean ginseng, the soup is cooked for several hours and it makes the chicken very tender so you can just tear it in half and find it to be filled with rice, this food is served in the summer for its nutrients to replace those nutrients lost through sweating during the hot summers in Korea, this was my 2nd time eating this and it was AMAZING (Warning!! I will use this word very often for this trip haha), it was boiling hot and the flavor of the ginseng was not overwhelming at all, of course we also had Banchan with this (Radish Kimchi and Onions in Soysauce*?*), the restaurant was very nice and we also got to try some Plumb wine with our food (yum!), this one tasted like a very sweet juice.
When we finished lunch we had lost the Camera crew (at this point there was HanJeon-Photographer, Yeon, Sun Ho and a Camera Girl) but they just went out 1st to film us going out of the restaurant hahaha 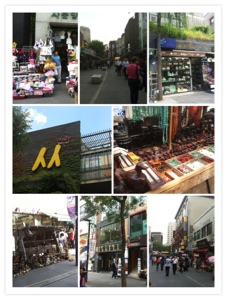 After lunch we took a short walk on Insadong and then headed to the Institute of Traditional Korean Food to visit the Tteok Museum and the Jilsiru Café, now let me tell you I’m a huge Tteok fan, I don’t think I’ve had enough tteok in my life (lol), the museum displays various rice cakes, some enjoyed during special occasions, major holidays, others are seasonal and other sare used in rituals, in the museum we got to see the utensils needed to make Tteok, then we went to the Jilsiru Café were we got to try some drinks and different kinds of Tteok (yay!!!), we had Chocolate Tteok cake, Sweet bean paste filled Tteok, Citron Tteok, Persimmon Tteok Cake, etc etc… I would’ve stayed longer but it was time to go to catch a performance, this time it was MISO, this is a traditional performance, sort of like Romeo & Juliette but with a happy ending, at some point the actors invite people from the audience to participate with the performers and after the performance you can take a picture with the actors, the performance has live music that at first I thought it was recorded until I realized the musicians playing in the back and I have to say they are…Amazing! I loved the music of the show, it’s not boring at all and one of the girls danced Gangnam Style hahaha.


At the end of the show (MISO) we had to rush because we had to go to Myeongdong!, in case you don’t know what Myeongdong is you can read this, we got to Myeongdong and you won’t believe me who was there…. YEON!! Our Camera Man #1…yay! *awkward face here*.

We walked around and I went to my fave store: Missha, I knew what I wanted so I went in super quick… it took me around 10 mins to get everything I wanted… What?? 10 minutes in a Cosmetics store is a very short time for me!!, I just love this store, the make-up is great and they don’t test their products on animals, plus they gave me lots of freebies hehehe, after my quick shopping stop we kept on walking. I really wanted to try some Street food so we wen tto look for a Tteokbokki place, Maria was very nice and agreed to eat it with me^^, we obviously were filmed while eating it…We wondered around Myeongdong and then met with Grace because it was dinner time!

We went to Bulgogi Brothers in the Seoul Finance Center where we met Dorothea (Germany) and Jessica  (Canada) to officially join the WKB Tour and Cathy (KoreaNet), we had our own private room at the restaurant (fancy, huh?), as soon as we arrived they started setting the Banchan at the table, we had 2 tables for 8 girls and there wasn’t enough space for all the food, there was Salad, Baked potatoes, Corn, Mandu (yum!!), Kimchi, Pepers, a Corn cream (??), and then the meat came… oh the meat!! We had Bulgogi, marinated beef and ribs, we spend over 2 hours eating as if it was our last meal… just when we thought we were over they asked if we wanted RICE or NOODLES… I had Naengmyeon: Cold noodles served with half boiled egg….  I don’t think I’ve ever eaten so much in my life… over 2 hours eating…. I’m glad the Camera crew wasn’t around to film us while eating so much hahaha
Around 10:30pm we headed back to the Hotel…we were all pretty tired but I still wanted to meet my friends Jo-Anna and Sanghyun, I met them in 2010 and they have been very nice with me so I got them a couple of Special Beers from Mexico, once we got to the hotel I went up to my room to leave my stuff and went down to the lobby to call them, 2 minutes later they were there so we headed over to a Bar in Itaewon, this is a Self Service Bar, you grab your beer, pay for it and sit at a table where you can get food delivered from wherever you want… how awesome is that????, we had beers and Sanghyun got a cheap wine that apparently tasted horrible (I didn’t try it…phew!), they introduced me to a couple of friends and I had a very nice evening with them, around 2am we called it a night, they walked me to the Hotel but I wanted to see if there was a store open to buy some snacks to bring to Mexico (lol) ,the store was closed and we said goodbye L, I walked back to the hotel and decided to stop by a convenience store to buy a drink but ended up just buying snacks hehe, at 3am I was getting ready to go to bed to be up at 6 to get ready for our road trip to Jeonju!!


It was a LONG yet a very fun day and this was only the begging of our trip… hope you enjoy reading about it as much as I enjoy writing about it :)

By the way…Thank you Jo-Anna and Sanghyun for going to Itaewon just to meet me!!!