April is only a few days away, which means that spring will be in full swing in South Korea!

The beginning of April marks cherry blossoms blooming in Korea.... Sitting on the bus floor April 4th and 5th, 2015 marked the peak weekend for cherry blossoms here in South Korea, which meant it was time to travel with Enjoy Korea to the small seaport town of Jinhae for the annual Cherry Blossom Festival! The roughly $30 registration fee provided us with timely and convenient transportation that dropped us off, and picked us up, right in the middle of the action. And the tour schedule allowed for everyone to just do their own thing for the whole afternoon once we arrived! I’ve booked tours with Enjoy Korea twice now, and will do so again for the Mud Festival in July. I highly recommend them!

It’s cherry blossom season here in South Korea, which means roads throughout the country are lined with beautiful flowering trees! The conditions are perfect for a Saturday morning bike ride, and the small naval port town of Jinhae welcomes thousands who flock its streets to take in the views at the annual Cherry Blossom Festival! Enjoy!

In early April, I went to the 52nd annual Jinhae Gunhangje Festival (진해군항제) also known as the Jinhae Cherry Blossom Festival. I don’t mind crowds and always have a good time at festivals in Korea, but surprisingly, I’ve never been to this festival before. It was great!

The city boasts that they have the most cherry blossom trees in the world. There are apparently 360,000 trees blossoming at once, if you’re curious.

Friends were discouraging me from going to the festival. Before I went to Jinhae, people were telling me that it would be too crowded (“everyone will be in your pictures” and “it’ll be so difficult to get there and back”), that the flowers had blossomed too early, and that it would rain. I still went, and I’m happy I did.

Fri, 03/15/2013 - 10:16 - unclouded.hope
Tweet
Training You know what that means! I am challenging myself this year and trying out my first 10K. If anyone knows me, you know I hate exercise. I just never liked it. The closest I get to it is through salsa and other forms of dancing. But Dave and Matt are runners, and like to [...] 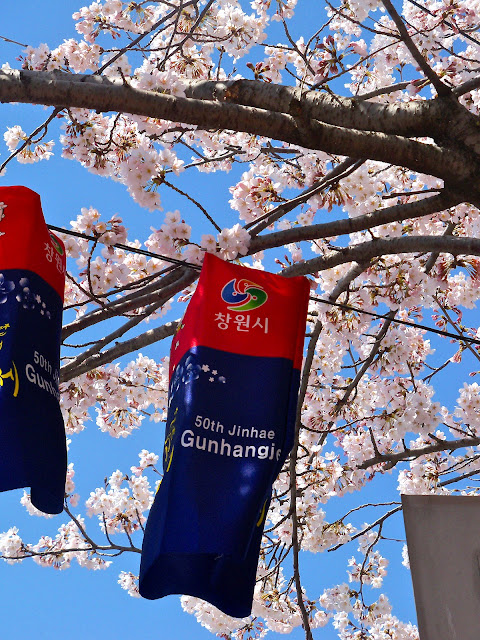 Welcome back to the Jinhae Cherry Blossom Festival.  For those of you loyal readers you will remember that I've gone here before and had a great time.  This time around things were still really nice and I had a great time, but man was it ever busiser than the time before.  This time we had to wait 3 hours to get a bus back to Busan (a one hour bus trip).

Korea is a country that loves a good festival. These range from the beauty of Jinhae's Cherry Blossom Festival or the dazzling lights of Jinju's Lantern Festival; to the charming cultural ones such as Gwangju's Kimchi Festival or Jindo's Moses Walk; to the downright weird such as Cheongsando's 'Slow Walking Festival'.

Oh, and the epicness that is the Mud Festival.

Photos and story by Ed Provencher

Skip it or day-trip it? Korea’s festivals are numerous, but how do you know which ones are worth going to? Travel blogger Ed Provencher makes it easy for us.