Though I’m not proud to admit it, I was never really big on keeping up with the news or politics when I after I came to Korea. I mean, I was generally aware of what was going on, but it was something that I didn’t spend too much time looking into. The problem with keeping up from the other side of the world is that I’m always on the outside looking in. The news seems much scarier when you’re not living in it, and the context of what’s being said can vary depending on the source. As a result,  I’m always left questioning the state of my home country, as well as whether or not it’s wise to return anytime soon. For now, based on the things I’ve been seeing, it’s looking like South Korea will continue to be my home away from home.

Wed, 11/12/2014 - 22:24 - The Kimchi Queen
Tweet
On Tuesday night, PD Notebook focused on the life of sexual minorities in Korea in a very human light. The episode can be torrented, but I haven't seen anything with English subtitles yet. 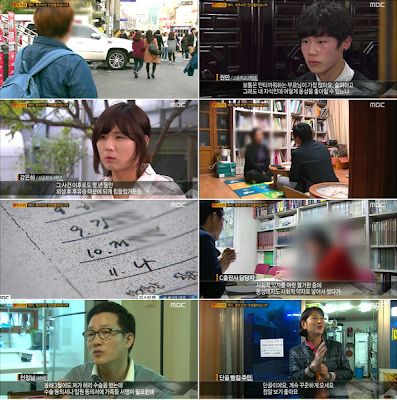 [TV Report: Hong Eui-seok] Hong Seok-cheon confessed that his counseling led to a preventing a suicide.

Yeah…This week’s strip probably isn’t exactly funny or all that significant, but what can I say? I’ve been watching too much World Cup 2014 to properly function as a human being during normal people hours.

Speaking of work, the situation depicted in this week’s strip is something my friends from all over the country witnessed when South Korea was playing against Russia. I don’t think there was a single professional setting that didn’t have the game playing that day. The situation probably would  have been the same when South Korea played against Algeria (which was an amazing game) if it hadn’t been on at such an odd hour. I guess it’s kind of a good thing that I don’t sleep normal hours to begin with.

Oh well, the sun’s out. Time for a nap. See you next week!

This has been my life ever since World Cup 2014 started. Coincidentally enough, I passed out just long enough to miss the United States vs Ghana game in its entirety this morning. I am so ashamed.

I don’t know when exactly I started using the term “sports ball”, but it’s kind of become my general term for all sports involving balls, especially since I don’t follow any sports enough to actually consider myself a fan.

This strip is dedicated to those of you living in Korea who now have completely messed up sleeping schedules. When games start at 1:00AM and keep going until it’s time for work, you’re going to have a bad time. I’d be lying if I said that I wasn’t a little bummed about the whole thing, as it seems like I won’t get to witness watching the game in a sea of Korean fans in red at my local World Cup stadium. I hear it got pretty wild in 2010, but I didn’t get here until right after it was all over.

Queer Links from the Week

Instead of watching saturday morning cartoons, we are entertaining ourselves with some great commercials

Cracks us up every time

Notice the “illegal money” they are actually saying ill ill gu which is 119.. we laugh every time here watch this one on tv.

You too have have beautiful skin like this man

I apologize if this comic is a little difficult to understand. You actually have to watch a fair amount of Korean television to really get it. I’ll try to explain.

This seems to happen to me every single time. Speaking of which, I actually drew this late at night when a bunch of movies I like decided to come on back to back. I didn’t end up getting to bed until around 6AM.

I guess it makes sense, seeing how most of the movies and shows I entertain myself with are in English, and Koreans may generally prefer to watch stuff in their own language during the day. Maybe I just need a different cable provider. Maybe I should just watch less television. The latter is probably the better idea.

The Curious Case of Chris Golightly

One of these things is not like the others

Over the past couple years, Korea really got bit hard by the reality/audition “become a star” type show that has been sweeping the rest of the world for a while now. One of the first to bring this wave upon 대한 was SuperstarK on Korean cable’s M.net. This near carbon copy ofAmerican Idol has also been one of the most popular shows, despite stiff recent competition from network audition programs, and many top competitors have been able to have some success on the Kpop scene following their time on the show (probably thanks in no small part to M.Net‘s powerful music label).