Neither Rain Nor Rain Dear Korea #091 - Running Through the Monsoon

Starting this week, I’ll be picking up some extra work in hopes of making some extra cash (at least for this month). While I’m hoping that this doesn’t mean awkward/late updates, I’m just writing this now as a warning. I’ll try to be good!

Korean summers are sometimes better known as monsoon season. When you’re not fighting off the dreaded heat, you’re probably getting caught up in rain somewhere. According to the weekly forecast in my area, it’s supposed to rain for the next five days. Boo.

If you haven’t read the first post you can read it here. At any rate, I am going to elaborate more on the topic and provide some great information about actually getting decent shots from this weekend. Since this will be my first actual time heading there with the intent of capturing images and not just enjoying the moment, I will be showing images of past firework events that I have been to. Don’t worry the information and techniques will be exactly the same.

Sun, 07/29/2012 - 15:42 - SeoulSearching
Tweet
The weather in Seoul is considerably different this summer than it was last year. Last summer, it rained everyday, consistently ruining my weekend plans and causing a lot of damage here in Korea. This year, it is still rainy from time to time but it has yet to put a damper on my fun. I've actually come to like the rainy season in Seoul, love it even. Sure, there are the monstrous mosquitoes that have the ability to move like lighting and whose bites leave welts that take at least a week to go away. And there's the umbrella traffic that can be ridiculously frustrating. But, I've come to discover and enjoy the magic that the Korean rain brings in with each passing storm.

We arrived in Kuala Lumpur this morning after staying in a small airport hotel last night. Taking the airport express train, we were carried from countryside through to suburbs and then briefly through the city until we alighted at KL Sentral, the main train station of the city.

After booking train tickets on to Ipoh for tomorrow, we found a taxi which took us in the central shopping and business area of the city, Bukit Bintang. It is also where we have reserved a room in a quaint guesthouse within sight of a large hotel we had been considering before our friend recommended otherwise. As we had arrived too early to check in, we left our bags with reception and set out to take a short wander around the locale.

Mon, 07/16/2012 - 13:38 - jmslesin
Tweet
Well it's that time of year again. The part of summer filled with sticky humidity, gray skies, and a weeks worth of weather forecasts stating only 'scattered thunderstorms'.

I looked out the window of my apartment this weekend to check on the weather's progress to find my street totally flooded! 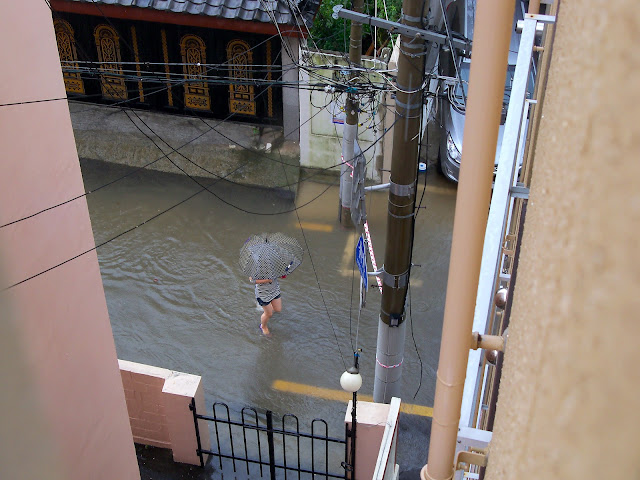 I know some people had it way worse and that the water went into the entry ways of some apartment buildings, or it was up to mid-calf in other places.


Now if only we could get a rain day off of school I would be a happy camper.

I know its lame to try and drum up ideas for a romntic anniversary with ones wife via a forum post but our plans for celbrating our 2 year on a camping trip were thwarted by weather and so as a newb to the Busan area I need to pick some local brains. Just looking for some friendly advice on nice restaurants suitable for a relaxed evening. We're not big boozers (anymore)...we like good scenery, people watching, etc so of anyone has any thoughts for a night out tomorrow that would be tremendous. Awesome, thanks.

I just finished making myself a mug of strong black coffee, turned a Tom Waits CD, brought in a reading lamp to the living room and have set myself up for a Saturday of writing in this rain dulled apartment of mine. When I finish that I’ll probably read.

비 비 Go Away, Come Again Another Day (in 21 months)

Alright, lame title (EDIT: is the new alternate title any better?) I know but it’s the best I could come up with for a subject that none of you readers are likely all that interested in. On Friday, South Korean mega-everything star 비 (Rain) announced he would finally begin his mandatory military enlistment on Oct. 11th. For those of you outside Korea, you may have seen him as Taejo in the awful Speed Racer movie, or perhaps even as Raizo in the also awful, but awful in an amusing way, Ninja Assassin. I would hope you’ve,  at the very least, seen his absolutely hilariously dance-off with Steven Colbert, but if not see it here.

I would argue these appearances make Rain, by far, the most successful South Korean star to enter Western entertainment. I also believe, probably more than any other star, 비 has also been the most successful branching out in different areas of South Korean media and that said I can say I am a fan of his work. First off, he’s an absolutely incredible dancer (I would rank him right up with Michael Jackson in his prime) and very engaging as an actor. I would recommend any Korean drama newbies to watch Full House (풀하우스), really a staple of the genre and what took Rain from a popular singer to megastar status. Finally, I would literally kill for those abs (and guys out there, be honest with yourself, you would too).