Airdre Mattner says she was drugged, abducted & raped in Seoul last September, but after dealing with South Korean hospital staff & police, including a recent Facebook post by police that revealed private information regarding her case, she says she's been devastated her even further. Korea FM spoke with Mattner & the Korea Herald reporter that's been covering her story to learn more about how both foreign & Korean victims are treated by police & other authorities while seeking justice. Find more information on Airdre Mattner's story at http://GoFundMe.com/JusticeForAirdre.

The National Human Rights Commission of Korea says the 2014 arrest of a Nigerian man violated his rights as authorities refused repeated requests to contact his embassy for more than a week.

Maxwell Iruviere says police confused him with another Nigerian & is now seeking compensation for his November 2014 false arrest & imprisonment. Korea FM spoke with Iruviere & Lawyers For A Democratic Society Attorney Yuna Lee about the incident. Police with riot shields fill Gwanghawmun square in preparation for planned protest against the Park administration in the aftermath of the Sewol disaster.

Guidelines prepared for police to protect the rights of sexual minorities

Thu, 03/28/2013 - 20:00 - The Kimchi Queen
Tweet
I saw this article in the Seoul Newspaper, but didn't find a translation. It was short, so I thought I'd translate it for my readers.
--------
Guidelines prepared for police to protect the rights of sexual minorities
March 19, 2013
Mr. A, a gay man, was threatened to be exposed as gay to his family and friends by his ex-lover of last year. Mr. A wanted to report it to the police, but he was worried his sexual identity would be revealed during the investigation process so he gave up on reporting the threat.

The People -v- The Black Guy on the Bus

Yesterday was, of course, the HBC Fest. It was very colourful, especially if you consider the busfuls of cops that turned up to help us out with crowd control. It’s good to see that our taxes are eventually getting their money’s worth, especially when it comes to the 5-O. Anyway, I’m sure that the prominence of the cops has well advertised on the Korean blogosphere. This suits this post perfectly as I don’t intend on sharing any pictures of the cops – although I did see one great picture of some guy standing in and helping out the cops as crowd control which was hilarious… Anyway more about the cops later…

Is Seoul ready for the G20? - and - an experiment that needs your help!

I had high hopes tonight. Get to work sorting out the photos and notes from the Haebangchon Festival, the Hi Seoul Festival, and the Irish Ceili Music / Dance Festival - all of which happened this weekend.

And then my desktop computer decided to crash. Thanks, desktop. Just what I needed. Anyway, I was reading Joy's post on Seoul and the G20 when the question presented made me stop and think:

Is Seoul really ready for the G20? 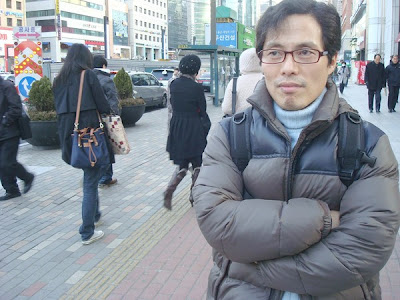