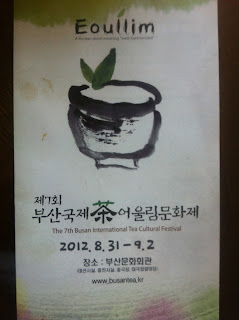 This coming Friday I'm pleased to be covering the 7th Busan International Tea Cultural Festival.
It will be held at the Busan Cultural Center (Busan Moonhwa Waygwan) This August 31st to September 2nd. A fine way for celebrating and taking the edge off after the typhoon that is hitting here rather quite soon.

This weekend cultural groups from Japan, China and Korea are coming to Busan part of the Joseon Tongsinsa Busan Festival. It starts this Thursday May 5th and goes until Sunday May 8th. It is a festival commemorating the time during the Joeseon Dynasty when Japan, China and Korea were at peace with eachother and were trading heavily. During that time trade delegations from Seoul would travel down to Busan where they would embark by ship to Japan.
What they don't tell you is that there will be a parade reenacting that time when an embassador would embark with his delegation to Japan to trade. The parade will also include real live horses and will take place Saturday at 2:00. At 2 there will be a few speeches and everyone in the parade will assemble in the park beneath Nampo tower. At 3:00 the parade will start, going down the hill and around a corner to proceed down the street past the Zen Buddhist temple heading towards the statuary, police station and roundabout.
It will be very crowded, most especially when the parade ends which will a good time to drop by one of the many teahouses along the parade route. (at the bottom of this post I've provided a tea map). 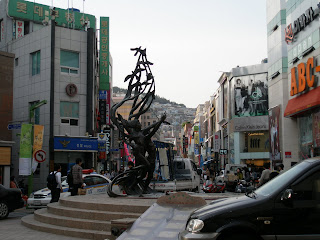 Here's the statue where the parade will pass. Up the street there's a great place for Korean teasets (usually 30,000-40,000 won). Just go up this street passing between the Police station on your right and good Calvin Klein on your right. 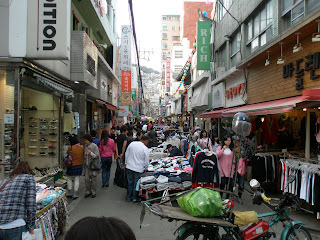 Another way to go is one street in from that main street. The one with all the food stands. You'll pass behind the 2F Chinese restaurant and behind the Zen Buddhist temple. Just after the temple on your left will be a women's underwear shop. Turn left at that shop. 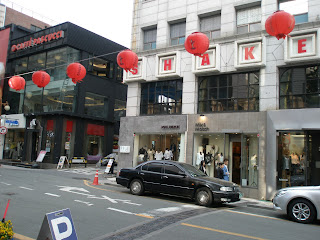 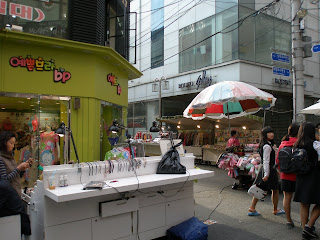 Heres the underwear shop on the left. Just walk under the umbrella keeping the undies on your left, empty grey building pictured here on your right. You'll suddenly pass several 2nd hand clothing shops. Right next to the 2nd hand clothes you'll find... 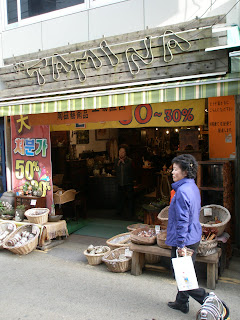 TAMINA!! The place where everything is always on sale. Tis the place for Korean teasets. One set comes with teapot, tea cooling bowl and several cups. Hands down the cheapest place in Busan for a proper Korean style teaset.
If hardware is not your thing there's a place that sells great floral teas in small packets: 5000 won per pack. It's also where I got a great Pu'er tea/Boey cha. To get there start at the statue. With ABC mart to your back and the police station to your right go along with the traffic down the curvy street. Eventually you'll get to a 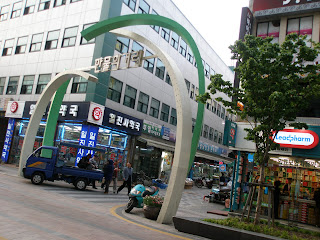 gate with two drug stores on either side. The gate says 만물의 거리or everything's street. Go through the gate up the street to near the end. 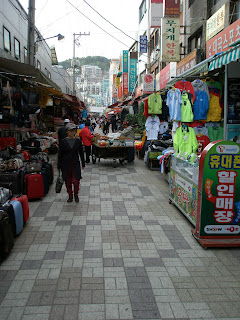 Going up that street you'll pass electric/lighting shops then it'll change to alot of great touristy stuff; t-shirts scrolls etc. near the end of the street on your right you'll finally find... 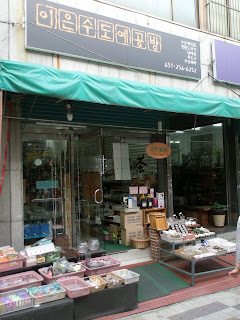 The trickly named 이은수도예공방 or Lee Eun Soo pottery making place. They don't make pottery there but sell tea hardware and steepables. I bought a western style teaset there : teapot with mesh insert and teacups for 10,000 won! There are still a few deals like that there!! She also sells flower and herbal teas as well as the classic Chinese Pu'er tea. Just ask to see her Boey Cha if you like. Her flower teas sell for 5,000 won each. 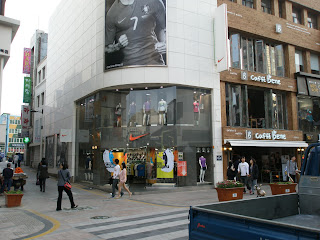 Also in the area are two teahouses. One serves an excellent Pu'er tea and another has the best green leaf tea to be had in Busan.

The best place for Pu'er tea in Busan is right across from the Nampo hill escalator. At the foot of the escalator you'll see what is pictured here: Cafe Bene and a Nike shop. To the left of the Nike shop you'll see on the 2nd floor a sign for a teashop/teahouse. 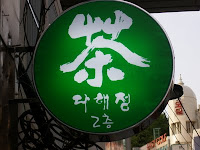 The sign is tea in Chinese with DaHengJung in Korean. It is a large teashop with 2 enterances on either street. They sell mostly Pu'er tea/Boey Cha. It is THE place for a fine cup of Pu'er and the store owner is quite knowledgeable. For ordering and what to do once you sit down there, just order 보이차 and see my earlier post on Boey cha here.
If green tea is your thing, well, then just head up the street. Go upstream (towards the car traffic) from the statue until you get to the Krispy Kreme donut shop. 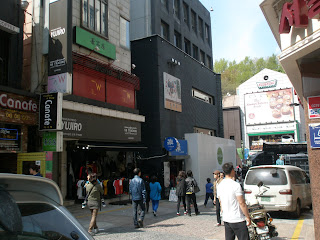 Here you can see the donut shop above, on the extreme right hand corner of this photo is Seoul Katdoogi. Across the street from that you can see a rectangular green sign. It says "Green Tea House" in English letters on it. Just go on up the stairs to the left of the clothing shop.