Re: Moving sale (Refrigerator and...
3 days 23 hours ago
Re: Merida Full Suspension Mountain...
5 days 8 hours ago

Editor’s note: After having his wallet seemingly stolen, the author now tries to get some answers with the help of police and security staff. Those answers prove surprising.

Once I had changed into the sauna uniform, ochre t-shirt and long shorts, the owner led me into the sweltering main room where we wound through snoring, scratching and shifting bodies to a raised wooden platform under which the owner deftly ducked and pointed to a single spot next to a man sleeping flat on his back. I told him it was too hot to sleep but he motioned under with both hands and said, “rest, rest.” Resistance seemed futile–and I had nowhere else to go–so I lowered myself into the corner space and cursed my night of decision-making. 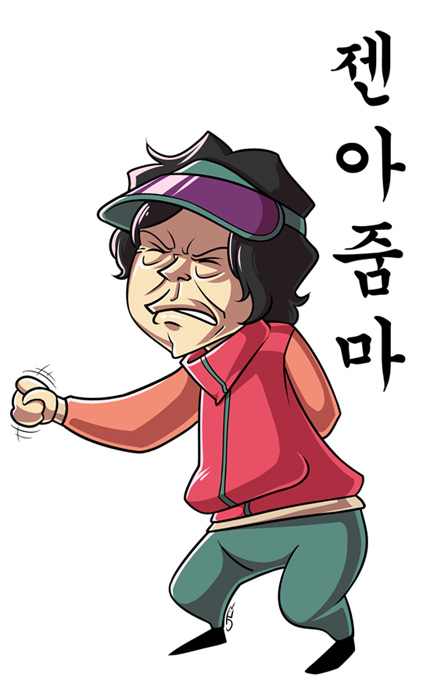 Hey guys, sorry to say that there won’t be a comic this week. Life seems to get insanely busy at the weirdest times, no? I hope everyone is having a great summer so far!

While there is no comic, I hope this picture of me as an ajumma will do for now. My birthday was this week (technically, just an hour or so ago), and I’m feeling insanely old. I’ll be an ajumma before it anyway. For anyone that doesn’t know what an ajumma (아줌마) is, it’s basically a title given to middle aged women. While being a middle aged woman doesn’t make one stand out in any way, Korean middle aged women are something else.  I will be sure to cover more on this topic in future comics.

Oh no, another late update! I sincerely apologize for that. There were actually a number of reasons for this particular comic being delayed. I actually had to rewrite it a few times, and even had to deal with some resistance of posting the whole thing.

For many of us living in Korea, I’m sure we’ve grown pretty familiar with the seriously not cool “The Shocking Reality About Relationships With Foreigners” news report. If you’re not familiar with it, feel free to look it up. I can assure you that there is no shortage of blog posts and YouTube videos surrounding the whole issue. I actually found the video somewhat ridiculous, but was very saddened to find out that there are still people who believe it as the truth.

I don’t know if this is too common in bigger cities, but down here in Gwangju, we have more than enough mountains. As a result, mountain climbing (more like hiking uphill in some cases) is insanely popular, especially amongst the older folks. One man I know likes to go on an eight hour climb up a mountain, get drunk off of soju, pass out, and then climb back down before nightfall. This is something he looks forward to doing each weekend. I have no idea how that’s even possible.

After being raised to treat old people as if they were the most fragile beings in the world, Korea turned out to be a bit of a shock to me. I often have to fight myself to not rush over and carry the ton of trash I see these old men and women dragging around. Yes, I have tried, and I have been dismissed many times.

Kind of makes you wonder what the next generation of Korean elderly will be like? I mean, you see these grandmothers lugging around stacks of boxes on their heads, and then you see girls in their 20′s whining about how heavy their purses are.

If I had to throw down with an old person in Korea, no matter their size, I think I’d have to put my money on them.

First off, I don’t have a problem with standing up for the elderly. If anything, it annoys me that younger middle school and high school kids just pretend as if they don’t see somebody that obviously needs the seat more than that.

With that being said, it seems like they always come right for me. Maybe I’m just paranoid. Honestly, I don’t mind. It just kind of stinks on those super long days when I can barely keep my head up.

On a side note, I apologize for the laziness that is the background of this strip.