Wax and Relax at Catchup Waxing

Thu, 04/16/2015 - 11:21 - SeoulSearching
Tweet
Spring is one of my favorite times of the year here in Korea, but sadly, it's short lived. Soon enough, summer will be here which means bikinis, beaches and bright sun... all of which can cause great distress among us gals. Fortunately for us (and willing guys, too), Catchup Waxing offers premier services to ensure that its customers' bodies are in tip-top shape for the season.

With multiple branches throughout Korea, Catchup Waxing is accessible and convenient for just about everyone. I decided to check out the franchise's Apgujeong location in Seoul, which also happens to be its most luxurious, for a few treatments.

Tue, 02/10/2015 - 14:59 - SeoulSearching
Tweet
After struggling with rosacea-- a vascular disease that causes intense redness and flushing of the face-- for the past few years, I decided to bite the bullet and experiment with laser therapy. After doing a bit of research on the internet (and cringing at some of the photos of the extreme side effects) I figured the benefits those that had had the procedure spoke of outweighed the risks.
So I made my way to Hus-hu Dermatology Clinic in Apgujeong. I had been to the dental clinic of the same name and location before and was exceptionally happy with their services and the results, so presumed the skin clinic would be the same. As it turned out, I was right.

A Girl's Guide to Gangnam, Day Two: Apgujeong and Cheongdam-dong

Tue, 01/28/2014 - 10:56 - SeoulSearching
Tweet
This is part two of a two-part, two-day itinerary focusing on the best shopping, eats and cafes in Seoul's Gangnam district.  To read part one, featuring Sinsa-dong, please click here.

After having a simple breakfast and a chat with the lovely manager at your girls-only guesthouse, hop a bus or hail a taxi to Apgujeong, a short 5-10 minute ride from Garosugil.

Wed, 01/08/2014 - 23:05 - SeoulSearching
Tweet
Going to the dentist can be scary anywhere, but even more so in a place where language barriers exist and clinical procedures aren't necessarily the same as those in one's home country.

Still, one's health should not be neglected simply because one is intimidated by language or unknown procedural costs.  Despite my nursing background, it actually took me a couple years to work up the courage to go to the dentist in Korea.  As a result, I ended up with a few cavities and an urgent need to get myself to the nearest clinic ASAP.  I did a few searches on Google and came across multiple testimonials that led me to Hus-hu Dental Clinic, a highly reputed dental office that caters to both locals and foreigners from all around the world.

Our Mamas & Papas headed to Moon Jar with a purpose…to try out their cocktails! It’s one of the most famous and popular places for upscale makgeolli in Seoul, so it’s safe to say we were expectant. The cocktails we tried were a little on the sweet side for most, but the quality was unmistakable.

Sun, 11/06/2011 - 20:03 - Seoulsome Girl
Tweet
Zen Hideaway is stylish yet casual restaurant serving Asian fusion cuisine. Korean, Thai, Chinese and Japanese mainly. It's a firm favorite of mine because the food is always fresh and flavorful. There are three branches located in Apgujeong, Hongdae and Myeongdong. 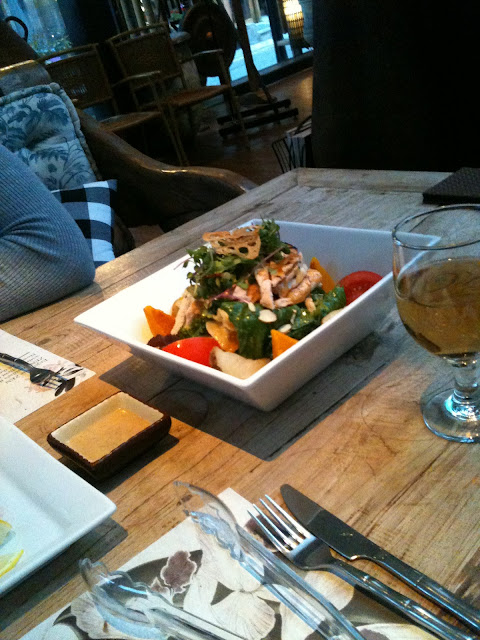 Thu, 10/27/2011 - 22:01 - Seoulsome Girl
Tweet
Salt Coke is a relatively new bar on Rodeo in Apgujeong. It's getting increasingly more popular because of the cheap drink prices in an area that is otherwise usually pretty pricey. I stopped in for a few drinks the other day. The bar itself has a trendy feel, it's minimal and mostly white. There's a dj playing on weekends. There's also a few projector screens playing movies, Toy Story was playing on the one by me. Awesome! The music was good and the bar was moderately busy. I think it will get much busier as more people hear about it though.

Cocktails start at 5,000 won and go up to9,000 for Mojitos. In this area you'd usually pay at least double that. They also offer various bottle sets. An Absolute Vodka set is 69,000 won including mixers and a choice of side dishes. So if you want a bar that still feels like Apgujeong without the price tag head here.