Knowing When to Say ‘Ajosshi!’

Thu, 03/28/2013 - 09:42 - mmpkorea
Tweet
We turned our experiments towards the blended ices range of cocktails, and the first thing that came to mind was the daiquiri! For this cocktail we tried using frozen makgeolli [...]

This week’s makgeolli cocktail is based on the idea of a long, hard day and that feeling of something cold and bubbly at the end of it. Makgeolli is regularly mixed with what is called ‘cider’ in Korea, which is really more like sprite and is non-alcoholic. This cocktail uses alcoholic apple cider as the mixer which ups the carbonation and gives it a fruity twist. The result was a light, fresh and slightly sweet beverage that was dangerously easy to knock back.

If you know anything about Korea you might be aware they like to drink a lot, so, why don't we talk a little bit about Korea's Alcoholic Beverages! 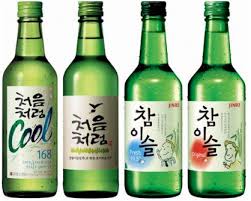 Story of the Blue Star was a place we had been wanting to try for months, and when we did…we weren’t disappointed. If you’re looking for a place which combines a traditional makgeolli atmosphere with premium quality makgeolli and food, this is it

These pictures courtesy of Mimsie Ladner at Seoul Searching.

MowMow came highly recommended as the new place to be for makgeolli in Itaewon. It boasted some top shelf, fresh makgeolli but our Mamas & Papas weren’t overly impressed by the food variety. Nonetheless, it is a great space for an after-work kettle!

Our Mamas & Papas headed to Moon Jar with a purpose…to try out their cocktails! It’s one of the most famous and popular places for upscale makgeolli in Seoul, so it’s safe to say we were expectant. The cocktails we tried were a little on the sweet side for most, but the quality was unmistakable.

The Korean government wants Korean alcohol companies to tone down the use of young celebrities in ‘sexually suggestive’ ads reportedly aimed at young Koreans on the net.